A very rainy hitchhiking adventure from Sydney to Melbourne.

Princes Highway A1 - approximately one thousand kilometers. Goal is to reach Melbourne in 6 days with some decent sightseeing along the way.

As a rule, Australia is split up in 2 main regions, north and south. The north has a tropical climate. Season are pretty much non-existing. You have “The Dry” followed by “The Wet”. If you’ve seen the news recently you would know Queensland, northeast Australia has suffered tremendously from “The Wet”. Floods are not unusual there and ‘La Nina’ is causing a extremely wet season. Even New South Wales and Victoria, states with a more temperate climate, are getting doused. Our planned hitchhiking adventure would have been a lot more exciting and not cut so short if it wasn’t for the never ending rain fall.

We did manage to hitchhike and see somewhat of the beautiful southeast coast. The plan was to randomly make our way south from Sydney depending on the rides we got along the coastal Highway #1, also known as the Princes Highway and look for spots to poach camping. First we had to get past Sydney. We got on the train in Medlow Bath in the Blue Mountains where we had been HelpXing for the last three weeks. 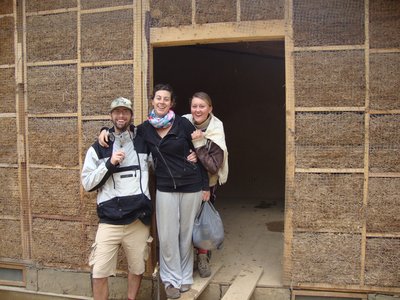 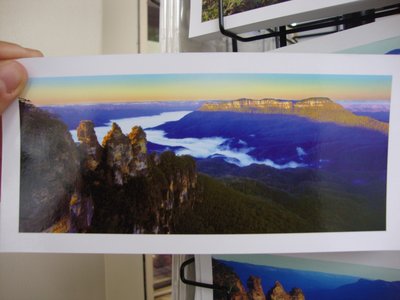 Bye to Aurelie, our fellow master cob renderer slash helpXer and the most recognized view of the Blue Mountains. One we actually never got to see because of the low hanging clouds that last day. So we settled for capturing a postcard. Hey, you have to be creative once in a while, right?

This particular train station and town is tiny, so the machine issuing tickets had a limited number of destinations. We quickly realized we were going to get away with only paying 3 dollars each for an open end – pay at your destination ticket. Basically we traveled an equivalent of almost 250 kilometers for that price. So we were off on a kick-ass start! 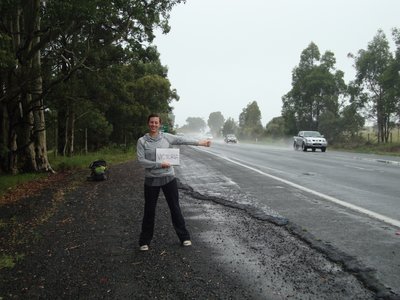 Jervis bay is supposed to be one of those elusively beautiful areas and I’m sure it is, but our experience of it was immensely grey and wet. Either way we did have a dry night camping out on the beach of Currarong though and the chips from the local fish and chips shop weren’t half bad either.

All these magnificent places were not really worth stopping for in the pouring rain, but I’ll tell you which ones we thought are not to be missed if blue skies are present. 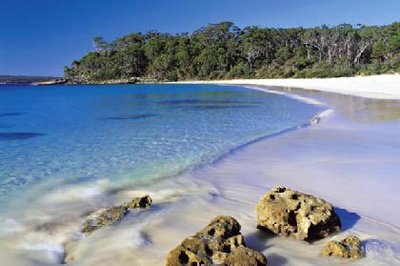 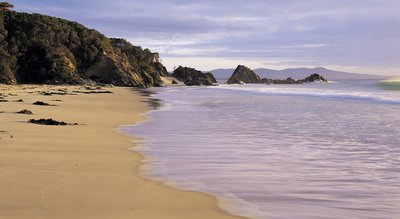 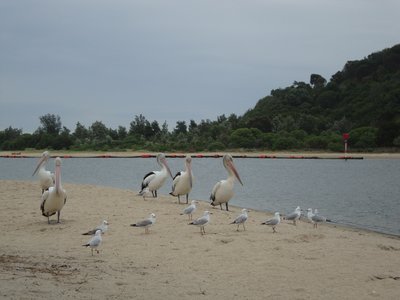 Jervis bay (1st picture), Batesman bay, Narooma, Eden, Mallacoota (2nd picture), Lakes entrance (Pelicans) and last but not least definitely go camping in Wilson Promontory National park, an enormous coastal wilderness area with lovely lakes, beaches, wildlife and hikes! You do not want to miss out on that one.. 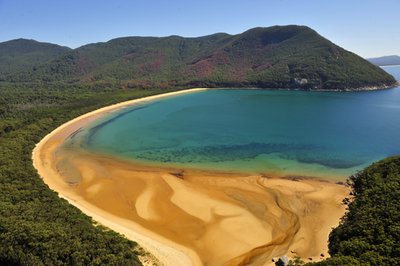 So because of the wet conditions we had to settle for 3 days of speedy hitchhiking and exploring, instead of a week of sunny activities. Hitchhiking while it’s pouring, is good for one thing though. We met Andrew. He picked us up right when we were ready to throw in the towel. While chatting away during the drive, we mentioned our passion for eco-building and especially building with cob. Once he realized our interests were similar to his, he invited us to spend the night at his place with his family. He couldn’t just let us camp in the rain now, could he? Their house, located on top of a hill overlooking the beautiful valley village of Candelo and filled with all different kinds of cockatoos, was made out of compressed earth bricks and cob. We talked the whole evening exchanging ideas and building experiences.

Another unique moment during our rainy adventure was hitching a ride with a local truckie. He was moving milk from point A to B and back daily. It gets lonely sometimes, he said. So we gladly hitched about 3 hours with this hilariously authentic fella, who couldn’t stop cracking slightly racist jokes. 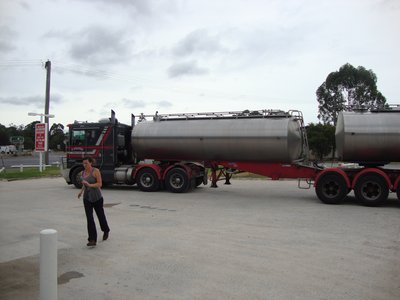 All in all, this was a very successful trip. We got were we wanted to be with plenty of time to spare. Too bad about the beautiful places we had to miss. Like they say, tomorrow’s going to be a brighter day, with the emphasis on brighter..