And who was it that said Seattle was rainy? Try the Great Southwest of Australia. It's called the Rainbow coast for a reason. Our 5 months in Albany, Western Australia.

Okay. First of all, I will apologize. Forgive me for forsaking my blog entries for the last 3 months. It may not be a decent excuse though, but I have been working my - now very much in shape - butt off, thanks to biking several kilometers in and out of town everyday for work. 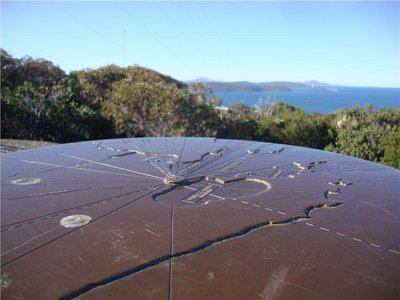 What can I say about Albany? The first words that pop in my head are grey, rainy.. and windy. But I'm not doing this town any justice at all. It has a stunning coastline and after all it is winter here. And what a mild winter it is in comparison to what I'm usually used to. I can hardly complain. It just makes me miss home more. That's all.

We lucked out basically. Five months in a wonderful house, stocked with all the herbs and spices and basic cooking supplies that I could ever need. With a magical veggie garden in the back, where all our daily needs for fresh greens are met. The two chooks, who don't really need looking after at all. They already realize, they are living in paradise. They've stopped laying eggs for a months or so, but now one of them is getting back on track so who could blame them for anything? And then there's the orange tree... even if there's no sunshine most days, the tree is making us feel loved at least. Never tasted such fantastic freshly squeezed orange juice in my life! But the best perk about this gig is.. the three boxes in the back room filled with VHS's from the nineties. What better way to spend your dark, cold, lonely nights?

So this house-sitting thing is working quite well for us actually... probably better then we could ever have hoped. We knew when we arrived in Australia, running out of money was going to happen at one point (it being so expensive here and all). When we figured out this overly expensive country came along with equally high wages, we knew we were going to take advantage and soon. But how to go about all of this you ask? No worries. Working Holiday Visa? Check. And that's all you need. The rest just takes a bit of smarts and effort and maybe some persisting as well. We were initially worried about a place to stay while we would be working. Rent prices were scaring us quite a bit to be honest. So we came up with two options. One: Find work that would include accommodation and maybe also food or.. Two: find a house-sitting gig in a place where finding jobs would be easy - easier. Both are equally as hard to find. So when we found this ad online for a 5 months long house-sitting job in a reasonably sized town along our planned travel route, we jumped on it immediately. We managed (somehow) to convince a 70 plus year old couple, who spend the winter up north every year, to let us take care of their house while they were gone for 5 consecutive months. Needless to say we will be eternally grateful to Harry and Val. They are the ones responsible for us putting away large amounts of money on our bank accounts at an extremely fast rate.

So work, work, work.... What does it feel like? After a couple of years of indulging ourselves in a rather relaxed way of living - traveling the world and not having to worry much about money. It feels a bit numb to be honest. People might think of us as the escapist kind. Not wanting to settle down, not wanting to tie ourselves down to certain responsibilities. Some of you out there would call us cowards for not wanting to deal with the real world (as they would call it). Which I understand. Completely. But see it from our point of view. Why not take advantage of the limitless possibilities out there? Why not get to know this planet for real before it's too late? We just want to have fun and experience all what is out there as much as possible. What's so wrong with that? We'll get tired of it at one point. We'll settle down. Just not yet though... It's way too much fun being a global nomad..

One place where I work at is the Royal George Hotel. A bartending job will stay the same wherever in the world you may find yourself. So it's a good skill to fall back on. This bar in particular has an immense amount of history. This whole town does by the way. What makes the George a different kind of pub to work at is the old fellas. It's a good old local kind of pub. Nothing fancy. I've got my regulars that come in everyday and they are amazingly entertaining and splendid company. The times they have made me giggle with their wild stories from the good old days. I've heard Robert Plant and Neil Young anecdotes from a former musician suffering from severe tinnitus. Or how about this other fella that one day decided to fill me in on a certain part of his past. "That time I almost went to the slammer for nearly killin me own brotha." That was one of the more heartfelt ones. There was still sadness and pain to be read on his face while he tried to explain. In his defense, his brother did take off with his fiancee while he was at sea. Most of these guys once used to be fishermen or working on the rigs or for the Navy. Now most of them are retired and meet up with each other in the pub almost every day. Every single one of them is adorned with plenty of visible tattoos and even though they might look like rough oldies not to be messed with to an outsider, to me they all are cuddly bears with a heart of gold. To see them all lined up sitting at the bar next to one another, mumbling and cursing a lot (ooh yeah... they curse a lot) with their free hand (the one not holding the beer) cupping their ears trying to catch what their neighbor just had said, because the batteries in their hearing aid might have run low again. You just have to see it for yourself, it's very endearing.

Albany was the right choice to make. Even though I did run into some trouble with a local business owner thinking, because I was a backpacker, that must mean he had a freebie to take advantage of me. Well guess what? I might be a backpacker but I'm not a stupid one. Shame on those who try to scam us out of our hard earned money. Luckily I caught on to it from week number one and made my way out of their as fast and confrontational-free as possible. Karma will have it's way.

So yes. I would recommend to every young backpacker looking for another adventure to come to Australia on a Working Holiday Visa and to work their butts off. If they are smart about it, they will walk away with a huge sum of aussie dollars to spend nice and slow in less "dearer" countries.

A Flemish Girl Down Under.